This week, as part of our ‘Blogging for Success’ series, we are interviewing Margaret from Oldfarm, a small family business that is selling their pork very successfully through their social media platforms. I recently visited Margaret and her husband Alfie  and we ‘swopped’ some pork for goat meat and I really can vouch for their pork – I had never tasted rashers that were so delicious. 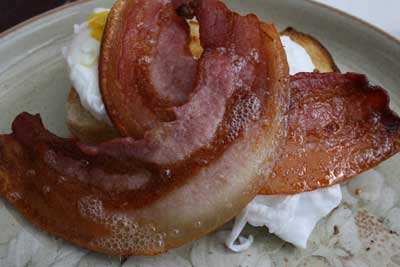 How long have you been selling pork for?

We started in a small way in 2008 just killing a couple of pigs and selling on to family and friends, but when we were both let go from our jobs in mid-2009, it was time to look at the business in a more serious way.

What social media tools are you using to increase brand awareness?

LinkedIn:  I participate in various forums there. Not necessarily about pork, but about social media and low cost marketing.

Twitter:  This has become our best medium this year for spreading brand awareness!  Last year it was approx. 60% Facebook and the rest taken up by Twitter/word of mouth but this year the switch has gone completely the opposite way!  I operate the Oldefarm twitter account, and Alfie, my partner, has a separate account (@pigoftheday).  He feels he can be unPC and can take a more controversial stance being somewhat removed from the business account.

Facebook: I was a reluctant convert to Facebook (the whole privacy thing, but I only post what I am happy to be public with), but have found it a very useful tool for our business.  We have followers on Facebook and an almost completely different set of followers on Twitter, so you have to keep them both going!

Pinterest:  I am still playing about with this… yes, we have some followers but I need to start spending more time on it.

YouTube:  We have a YouTube channel set up, but Alfie needs to start practising using the video!

As your blog topics tend to be very varied which is, of course, part of its delight, do you have any examples where your blog posts resulted in increased sales or free press coverage?

I don’t think any of my blog posts have resulted in direct sales.  However, there are a few that come to mind that definitely increased awareness of us.

One post was on social media and how we use it to promote the business … this post was obviously very popular with Social Media companies who used it as a case study for their clients … and we did have an increase of Twitter followers from that.

Similarly, when I wrote the post about our nasty abattoir experience there was a huge response on the blog itself and an upsurge of ‘likes’ on the Facebook page and followers on the blog and on Twitter.

Whether this will lead to sales?  I would like to think that it will probably do so.  I have found that people can be a fan/follower for months before they finally decide to order.  One man was a fan and regular commenter on our Facebook page for 18 months before he placed his first order!  It is a game of wait and see!

We have been extremely lucky with free media coverage.  It was through one of our fans on Facebook that I got to appear on TV AM and promote the business.  And we have also had a lot of newspaper coverage and magazine articles through contacts we have made via  both Twitter accounts.  We are both avid ‘networkers’ at all times and this has helped enormously with the media coverage.

What tends to be the most popular topic for your blog posts?

Gosh!  I write about so many different things that happen here, that anger or annoy me.  And then I post recipes too!

However, prompted by your question I’ve looked back at the statistics and the most popular are the ‘home’ posts.  The posts about what’s going on, or not going on, in our lives.

I should check those statistics more often!

Your blog isn’t integrated into your website, do you think this has an effect (either way) on brand awareness/ sales?

Interesting, Lorna, that you should ask this question right now!  I am at the moment getting quotes to integrate the two!

The blog originally started as more of a ‘personal’ diary of our life here, but it has become more and more part of the business [well our life is the business now in an holistic sort of way], so I think the time has come to integrate the blog into the website.

It is very confusing at a network meeting, or any forum, introducing yourself as being from Oldfarm  and then saying but my blog is A Year in Redwood.   I reckon it makes it harder for people to remember either name.

So combining the two is a work in progress at the moment hopefully a short one!

As a successful small business that is using social media to spread the word, do you have any tips to share with any SMEs thinking of investing time in social media?

Don’t become obsessive about the numbers!  You can look at other brands and their facebook and twitter fanbase is huge …… BUT….. are they getting orders for their efforts?  I would safely say that approximately 10% of our Twitter and Facebook followers have actually ordered from us.  That is 120 people that we would not have met otherwise.  If we can make them regular customers then we are better off.  Remember that “Social media” should be just that Social, sales come from knowing and trusting people.

Be patient!  People will watch, comment, chat…. and finally, something will trigger them to order.  You cannot rush it.

Be Yourself!   I was once told that I was ‘off message’ by a Marketing Consultant because I was posting about stuff other than the pork (he felt I shouldn’t even be posting photos of the pigs!).  However, I have found that people want to see other things.  They want to know about our ‘lives’.  I have had American followers tell me they live their ideal life through us!  I know they are in America and we don’t export pork to America (yet!) but perhaps they have friends or cousins in Ireland who are watching!

I’d like to thank Margaret for partaking in our ‘Blogging for Success’ series and sharing her experiences with us. What becomes apparent is that it is not only important to show your expertise via your social media channels but also your personality and your passion as they will often become your most popular posts. Your blog can act as the core to your other social media platforms and Margaret has recognised that Oldfarm has, in some instances, different followers on twitter to facebook but the goal is to increase brand awareness and if people want to find out more, they can do on her website, blog or even the old-fashioned way, of picking up the telephone.

If you have been blogging successfully for your business and have tips to share with our readers, we’d love if you could get in touch with Marie or I.

I'm a copywriter and social media consultant at www.writeontrack.ie, I teach social media online at www.weteachsocial.com and my personal blog Irish Farmerette recounts stories about life on a dairy farm in rural Ireland.
View all posts by Lorna »
« Previous post
Next post »

2 responses to “Blogging for Success: Interview 2 – Margaret of Oldfarm”

Why Does My Business Need A Blog?

Do you have a business blogging question you would like us to tackle? Then why not submit it to writeontrack@live.ie and we will feature it on our blog.
Loading Comments...
%d bloggers like this: